Organistation of models for photoshoot 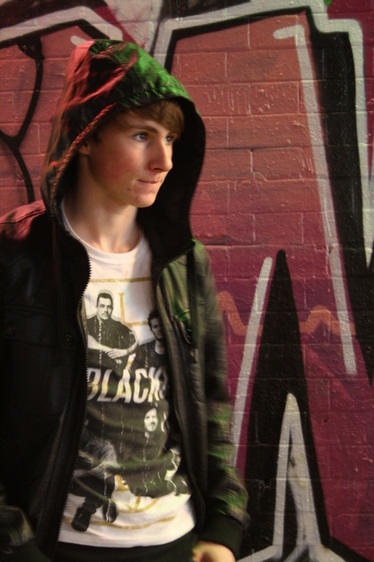 For my models, i plan on getting about three people which will represent a band like on the kerrang magazine i analysed and other issues of the magazine. This 'band' will be the front page and double page spread content of my magazine.
The people that i plan to use are my friends michael, Milton, and mark.


I plan on contacting them first via facebook, and then on the day i will call them with my mobile phone.


<this is Milton, one of the four proposed band members.

I also need other pictures for my contents page and maybe a small one on the front cover. For this I plan on using my friend Alex as she fits in well with the music as she likes: The Blackout, Korn, A Day To Remember, Enter Shikari, and many more artists that are in the metal and rock genre.

Jared and Chris are acquaintances that are in my media class. I am using them in the photo shoot to convey a rock duo who will be featured on the front cover. I didn't need to contact these two by Facebook as they sit next to me in media, and i just asked them now and they said they would help.

Alex is also in my media class but i have known her since secondary school. She is also going to be on my front cover and has already decided to help me. 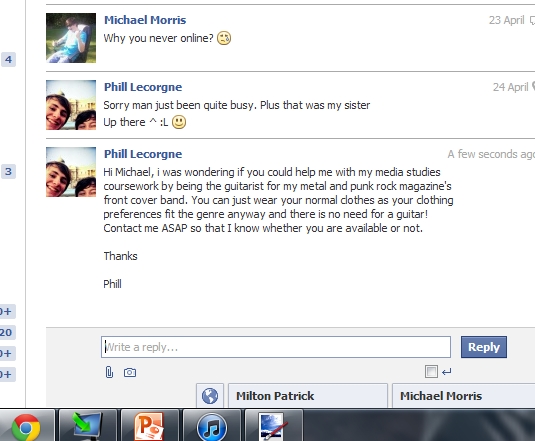 Mark is a great friend I have known since primary school. He comes to the college and is very reliable.

Mark is also interested in rock music since i introduced him to it. Before that he listened to Five and Robbie Williams. (he is still partial to a bit of Robbie)

Me and Milton call him 'The Heff' because his last name is heffer. 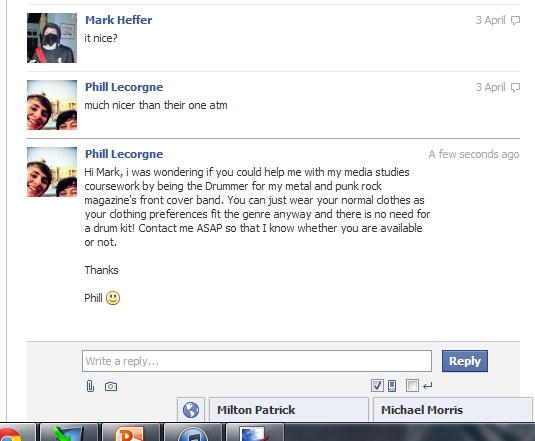 Milton is a friend of mine who goes to the oratory private school. As we don't see each other on a daily basis i see him a lot on the weekends.

Milton is quite reliable but is liable to change plans last minute. As he is going to be the front man its important that i consolidate the date and make sure he does turn up when i need him. 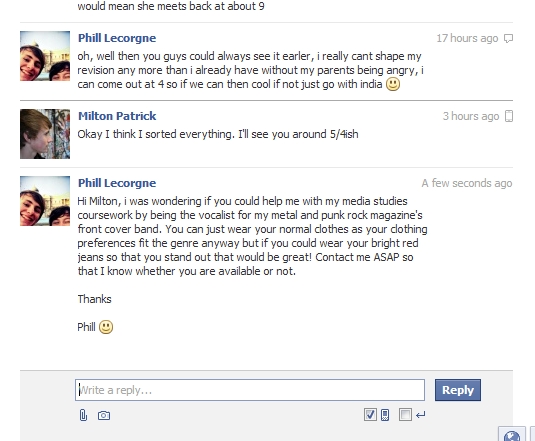 Michael is a friend of mine who goes to Berkshire college of  'downy' agriculture and studies public services.  He is very keen to socialize ALL THE TIME which means I can count on him to be there.